Where is it easier to conceal a kdinapped child? Peoria, Ilinois or New York? The Justices probed this issue in Lozano v. Montoya Alvarez.

JUSTICE SOTOMAYOR: My gosh, all it takes it moving to Peoria. I mean, I don’t mean to denigrate Peoria, but all it takes is moving to a place that has no connection to -­

The Chief Justice was not amused.

CHIEF JUSTICE ROBERTS: Those are us from the Midwest think it’s actually easier to hide a child in New York.

Justice Alito, who hails from the outer borough of New Jersey, was not persuaded it made a difference where a child is concealed.

JUSTICE ALITO: You don’t need to do very much concealment. You can go to Peoria. You can go to New York City, and — and it’s going to be an enormous struggle to find that child within a year.

Update: The always-entertaining John Elwood is from Peoria, and has a picture of a grain elevator from outside his home town.

Following up on Justice Sotomayor’s hypothetical about the effect of a parent taking a child and concealing them in Peoria, Illinois, Justice Breyerasked (see p.33) about a circumstance where a “mother kidnaps the child” and they “live in a grain elevator, a nicely refurbished grain elevator, in Peoria for a year.”

Because Peoria is my (much-loved) hometown, I happen to have a photo of “a nicely refurbished grain elevator” just outside Peoria.  Peoria is more industrial than agricultural, so there’s many more refurbished warehouses than grain elevators; indeed, this is the only one I know of, which why it warranted a photo. 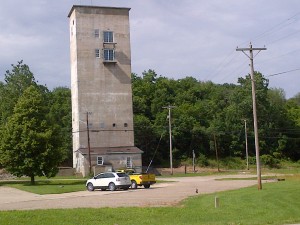 I hasten to add that the question is very much a hypothetical in the most relevant sense, in that there is no reason whatever to believe that anyone is living there in violation of a custody order.