Why Jeffrey Toobin’s Reaction to ACA Arguments may be intentionally a tad overstated? 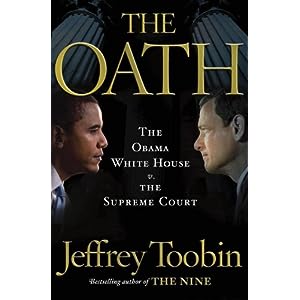 I think he may just have a vested interest in Obama’s signature legislation being struck down the Court. He has a book coming out in September 2012 called, quite ominously, “The Oath: The Obama White House vs. the Supreme Court.” (Riffing off the Chief’s flubbing of BHO’s oath, nno doubt). Just look at the photo!

Obviously, the book hasn’t been finished yet, but the narrative will work so much better if Obama loses, and decisively so.

By putting himself out there, Toobin can now claim that he *knew* the mandate was going down. It makes the narrative so much better.

Update: Toobin is doubling down:

“I’m not wild about being so far out on a limb, but all I can do is call it the way I see it, and I did,” Toobin said by telephone Monday evening.

“In my experience when the argument goes badly for one side, that side generally loses,” Toobin said. “That’s not obviously a 100 percent guarantee [but] my view of oral argument is based on watching oral arguments change at the Supreme Court over the years.”