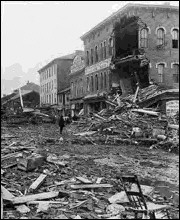 An interesting article in the Times from June 3, 1889, 3 days after the Johnstown Flood, about the state of martial law imposed.

A temporary martial government has been established over the ruined city of Johnstown, under the Adjutant General of Pennsylvania, assisted by military companies from Pittsburg and by volunteer officers. Attempts at disorder and violence by small gangs of tramps have been vigorously suppressed, and several marauders have been lynched and shot to death, for the people in the solemn earnestness of their work of succor and rescue have not the patience to wait the tedious process of law.

The tedious process of law, indeed.