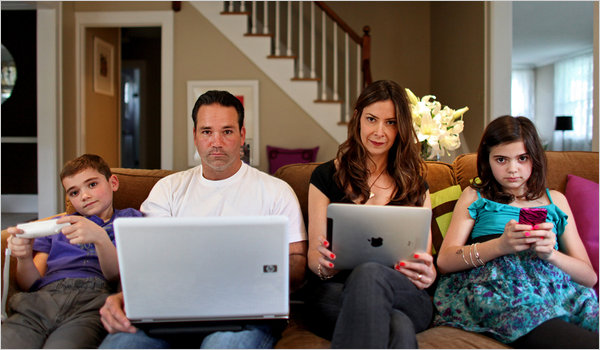 Over the weekend, the Times had a piece about the new modern family.

After a taco dinner one Wednesday in March, Dianne Vavra and her family retreated to the living room of their Cape Cod-style house in Huntington, N.Y., where they curled up on the spacious beige sofa amid hand-stitched quilts as an icy rain pelted the windows.

Ms. Vavra, a cosmetics industry executive in Manhattan, looked up from her iPad, where she was catching up on the latest spring looks atRefinery29.com, and noticed that her husband, Michael Combs, was transfixed, streaming theN.C.A.A. men’s basketball tournament on his laptop. Their son, Tom, 8, was absorbed by the Wii game Mario Kart on the widescreen television. Their daughter, Eve, 10, was fiddling with a game app called the Love Calculator on aniPod Touch. “The family was in the same room, but not together,” Ms. Vavra recalled.

One family. One room. Four screens. Four realities, basically. While it may look like some domestic version of “The Matrix” — families sharing a common space, but plugged into entirely separate planes of existence through technology — a scene like this has become an increasingly familiar evening ritual. As a result, the American living room in 2011 can often seem less like an oasis for shared activity, even if that just means watching television together, than an entangled intersection of data traffic — everyone huddled in a cyber-cocoon.

Only one screen per person? Weak. I have four by myself.

I have argued in many other places that tomorrow’s generations learns and interacts differently.

Nearly 60 percent of American families with children own two or more computers, and more than 60 percent of those have either a wired or wireless network to connect to the Internet, according to studies by the Pew Research Center’s Internet and American Life Project. A third of all Americans log on from home multiple times a day, nearly twice the number that did so in 2004.

Education should reflect that.

“The transformation of the American living room into a multiscreen communication and entertainment hub” promises to “change our domestic sphere,” said Lutz Koepnick, a media professor at Washington University in St. Louis who studies digital culture. “Individual family members might find themselves contently connected to parallel worlds almost all the time.”