The Urgency of the Black Swan: Dodd-Frank 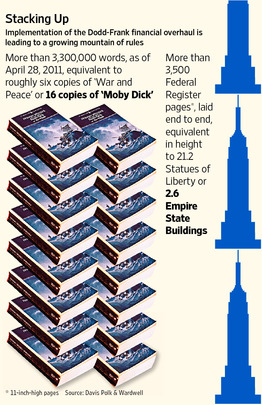 In previous posts, I have characterized Dodd-Frank as an archetypal black swan piece of legislation. Black swan legislation is usually rushed through to passage, citing an urgent need to solve a problem; yet, it takes an inordinate amount of time to actually implement. Ashby Jones has an interesting piece at WSJ discussing some of the delays for Dodd-Frank:

The WSJ’s Jean Eaglesham reports on Monday on just how much work the passage of the law has created, namely in the form of crafting the regulations that support the law.

According to Eaglesham, the process has produced more than three million words in the Federal Register—or more than 3,500 11-inch-high pages that would stretch end-to-end more than a third of the way from the Capitol to the White House.

Furthermore, she reports, a lot of the work hasn’t even begun. About 62% of the 387 sets of rules required by the law haven’t even been proposed. In April, not a single U.S. agency met any of the 26 Dodd-Frank-related deadlines set for April under the law. Just 21 rules are finished.

I love this line.

“The reality is, we’re not going to complete all the work in the timetable Congress set,” Scott O’Malia, a commissioner at the CFTC, said in an interview. But the need to “get the rules right” is more important than rigidly meeting Congress’s “unrealistic” deadlines, he said.

What concern should agencies have for pesky Congress? I mean, who’s in charge, really?

So it’s important to get it right *after* the law is enacted, rather than *before* when time is of the essence. Does this entire enterprise not seem backwards?

The piece even compares Dodd-Frank with another black swan legislation, Sarbanes-Oxley.

The Dodd-Frank law has 849 pages, compared with 66 pages in the Sarbanes-Oxley Act, a 2002 law that overhauled accounting rules following the Enron scandal. The landmark Glass-Steagall Act, which created the Federal Deposit Insurance Corp. and barriers between commercial and investment banking during the Depression, was a slim 34 pages.

“Dodd-Frank is Sarbanes-Oxley on steroids. It’s an exponentially greater volume of regulation,” says Margaret Tahyar, a Davis Polk partner. The “sheer number of rules still in the pipeline makes it almost inevitable agencies will miss an increasing number of deadlines over the next year.”