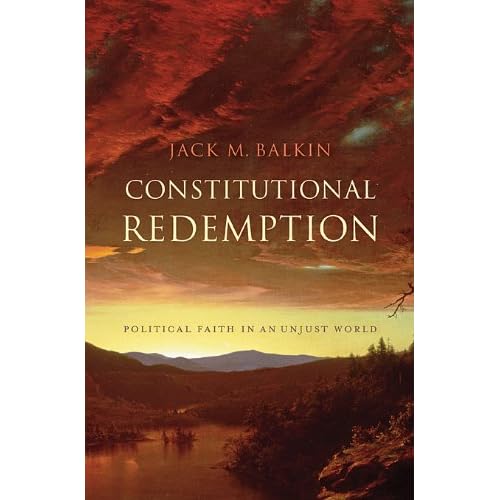 So I am confused. What the heck is this? This is quite evangelical. It looks like a painting I would buy at a gas station rest stop, with some quote from the Bible printed underneath it in a white script.

I realize that Balkin’s subtitle deals with political faith in an unjust world, but this cover is really over-doing the entire religious theme. I don’t know, it doesn’t resonate with me. I’ll read it in spite of, and not because of the cover.

Update 2: In his review of Balkin’s book in The New Republic, Adrian Vermeule also comments on this constitutional cover:

THE COVER OF Jack Balkin’s new book perfectly captures its temper, and that of many progressive constitutional theorists. Dark clouds swirl over the land, while in the distance, beyond the mountains, a narrow band of sunlight gleams. But is it the rising sun or the setting sun? We must have faith, Balkin argues, that the promises of the Constitution will someday be redeemed, and a new dawn of justice will blaze forth.