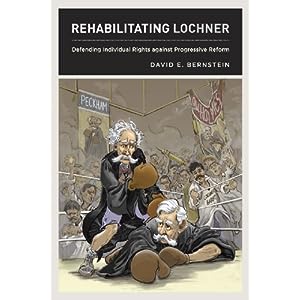 In this JoshCast, I chat with David Bernstein, author of Rehabilitating Lochner. David’s new book provides a revisionist history to one of the most infamous cases in Supreme Court history, Lochner v. New York. During this lengthy discussion we address a host of issues, including:

I do push back, and challenge David by asking him where we would be today if Lochner had not been repudiated. Would the modern regulatory and welfare state exist as it does today? What would have become of the New Deal? I also question whether he is simply re-fighting 1937. Finally, I inquire as to potential charges of “law office” history written by attorneys, and not historians.

I conclude by asking about the future of liberty of contract, and what the fate of this ill-fated jurisprudence may hold.

I should note that I took David for ConLaw 2, and he taught me Lochner, so perhaps I am somewhat biased. I should also note that David gave me a B+ in ConLaw 2 (chutzpah in hindsight, I know). That, alone, should be grounds for a negative review, yet I still liked the book.