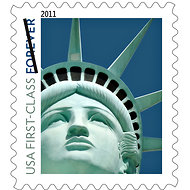 Oh the irony. The Postal Service attempts to make a stamp honoring one of the greatest symbols of American liberty–the Statue of Liberty. However, rather than including a photograph of the New Colossus in New York Harbor, they included a photograph of the Statute of Liberty replica at the New York-New York casino in Las Vegas. Huddled masses yearning to breath free are cringing at this serious liberty failure.

And the best part? The Post Office won’t change the design. From the TImes:

“We still love the stamp design and would have selected this photograph anyway,” said Roy Betts, a spokesman. Mr. Betts did say, however, that the post office regrets the error and is “re-examining our processes to prevent this situation from happening in the future.”

Not, woops our bad, but it would be too expensive to replace all those printed stamps, and that would be a waste of taxpayer dollars (yes, the Postal Service is a ward of the American taxpayer). That, I would buy. We get utter denial, and BS that they would have selected it anyway. Seriously? Doublespeak.

So what is the difference between the Statute of Liberty and its Nevadan facsimile?

But it takes a real student of Lady Liberty to notice the contrasts in a stamp-size photo of her head. The hair is different. The replica’s eyes are much more sharply defined. A rectangular patch — a plaque, maybe? — is on the replica’s center spike.

The poignant Ed Koch gets it right:

“It simply means the post office is doing a stupid thing.”