If I was an aspiring attorney in the 1870, and was considering Columbia and Yale Law School, which one would I choose? The New York Times has a hilarious retrospective with various advertisements that Ivy League schools ran in newspapers enticing prospective students to attend their school. 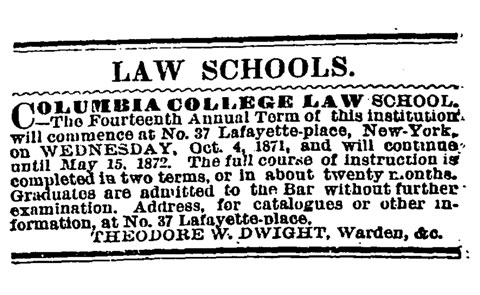 Take this advertisement for the Columbia College Law School from Sept. 27, 1870. Here are some of the details: 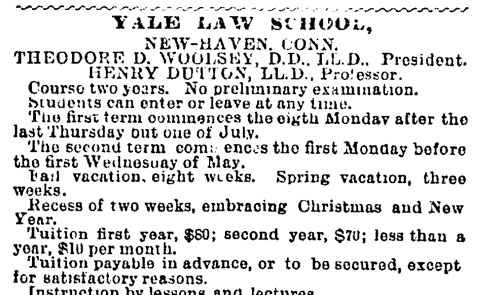 Or, take this advertisement for Yale Law School from August 4, 1868 (almost 2 months after the ratification of the Fourteenth Amendment!).

Hilarious. Here is the TImes’ writeup:

In an ad hovering over a pitch for cured hams on Oct. 7, 1871, Columbia Law School assured applicants that (unlike some rivals) its graduates were “admitted to the bar without further examination.”

Harvard Law opted instead to drop the names of distinguished faculty members in ads it ran from 1868 to 1871. And Yale Law School, one of the most sought-after law schools on the planet, ran ads in August 1868, a time when its own future within Yale University was rocky, regaling student with reasons to consider New Haven.

They included “access to library without extra charge,” eight weeks of fall vacation, three weeks of spring vacation and a two-week recess “embracing Christmas and New Year.” And, the ad noted, “students can enter or leave at any time.”