Have a Very Snooki New Year

What better way to ring in the New Year than to see our beloved Snooki dropped in a ball? While she won’t be descending from Times Square, the brains at MTV secured a spot in history for Snooki in Seaside Heights. It’s a Jersey Thing.

From the New York Times:

MTV’s original plans had called for Ms. Polizzi to be placed inside a ball that would have been lowered in Times Square before the official countdown to 2011 on Friday night. (In an interview with USA Today, Ms. Polizzi compared herself to a “hamster,” using some colorful, Snooki-esque modifiers.)

But on Wednesday the Times Square Alliance and Countdown Entertainment, which organize the Times Square celebration, halted those plans. “It was never intended or requested for Snooki to be in the actual New Year’s Eve Ball in Times Square,” the groups said in a statement. “The request to have her in a separate ball on a set-back roof came too late and was too impractical to fit in to our outdoor events.”

Ms. Stabley said Seaside Heights received and approved MTV’s application for a permit there on Wednesday, and that preparations were already under way to construct Ms. Polizzi’s descending ball apparatus at the “Jersey Shore” house.

TMZ has pics of the ball: 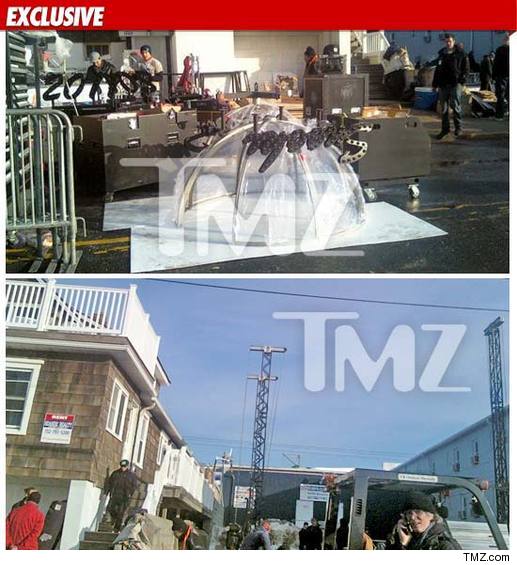