Last year (in one of my first blog posts) I compared the covers of two prominent constitutional law books–Randy Barnett’s Restoring the Lost Constitution, and Balkin, Siegel, et al Constitution in 2020. Randy was kind enough to provide a link to that post.

Today, I would like to compare the cover of Barnett’s book with Erwin Chemerinsky’s new book, The Conservative Assault on the Constitution. 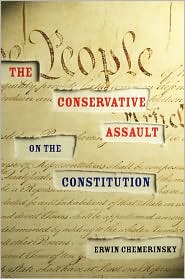 So what can we conclude?

Let’s focus on their areas of disagreement. Both Barnett and Chemerinsky seek to excise the following provisions from the Constitution:

The preamble doesn’t really have any meaning anymore, so that’s out. By both omitting the phrase “legislative Powers herein granted” from Articel I, I suppose their only area of agreement is that Article I should not include any limitation on Congress’s powers, and that they should be able to do anything they want. I’m glad Barnett cleared that up. I thought he was in favor of a strict understanding of enumerated powers, or something like that. I score that round a wash.

However, Barnett cuts out the 3/5 clause, which is good. Chemerinsky leaves it in, which is bad. So Barnett wins that round.

Because I’m not sure which way Footnote Four cuts here, I’ll call it a tie.