I’m not a mulitasker. I’m a “supertasker”

Take a look at this excellent piece in the New York Times on mulitasking.  I recommend you read it in its entirety. This really explains a large component of who I am.

A few points to pick out. The story notes that some people who multitask are at a significant disadvantage in acquiring certain types of information, and disregarding irrelevant information:

In a test created by Mr. Ophir and his colleagues, subjects at a computer were briefly shown an image of red rectangles. Then they saw a similar image and were asked whether any of the rectangles had moved. It was a simple task until the addition of a twist: blue rectangles were added, and the subjects were told to ignore them. (Play a game testing how well you filter out distractions.)

The multitaskers then did a significantly worse job than the non-multitaskers at recognizing whether red rectangles had changed position. In other words, they had trouble filtering out the blue ones — the irrelevant information.

So, too, the multitaskers took longer than non-multitaskers to switch among tasks, like differentiating vowels from consonants and then odd from even numbers. The multitaskers were shown to be less efficient at juggling problems. (Play a game testing how well you switch between tasks.)

Other tests at Stanford, an important center for research in this fast-growing field, showed multitaskers tended to search for new information rather than accept a reward for putting older, more valuable information to work.

Although I have not been diagnoses, or even tested (beyond the simple games linked in this New York Times article), I really don’t think I fit into this paradigm. I am not stressed out, I handle many streams of information quite well, and am always able to put forth productive efforts at high (but not perfect) quality in short periods of time. I think, I am what the article calls a “supertasker.”

Preliminary research shows some people can more easily juggle multiple information streams. These “supertaskers” represent less than 3 percent of the population, according to scientists at the University of Utah.

The article profiles one multitasker. His computer setup reminds me very much of my own.

That is the tweet that appears on the left-most of Mr. Campbell’s array of monitors, which he has expanded to three screens, at times adding a laptop and an iPad.

On the left screen, Mr. Campbell follows the tweets of 1,100 people, along with instant messages and group chats. The middle monitor displays a dark field filled with computer code, along with Skype, a service that allows Mr. Campbell to talk to his colleagues, sometimes using video. The monitor on the right keeps e-mail, a calendar, a Web browser and a music player.

The NYT has a good visual of his monitor set up. Also interesting is the video of how his eyes dart from monitor to monitor. My eyes work in much the same way.

I also have four monitors. Although this picture doesn’t demonstrate my usual arrangement of applications, here is my usual layout.

On the laptop screen, I keep my email. From left to right, the first monitor I keep Pandora, Adium chat Client, and Tweetdeck (monitoring my facebook feed, and two twitter accounts). On the middle monitor I keep my documents open, whether it is word, excel, or powerpoint. On the monitor on the far right, I keep open Google Chrome, usually with about a dozen tabs, including google reader and others. Although I am quite addicted, I do possess the ability to go periods of time (a few hours if needed) without the need to check my blackberry. Additionally, I do not play video games, which I find to be an absolute utter waste of time. And while I sometimes leave my blackberry on the table during dinner, there are times when I am able, and do, keep it in my pocket.

Update: Check out my supertasking workstation. 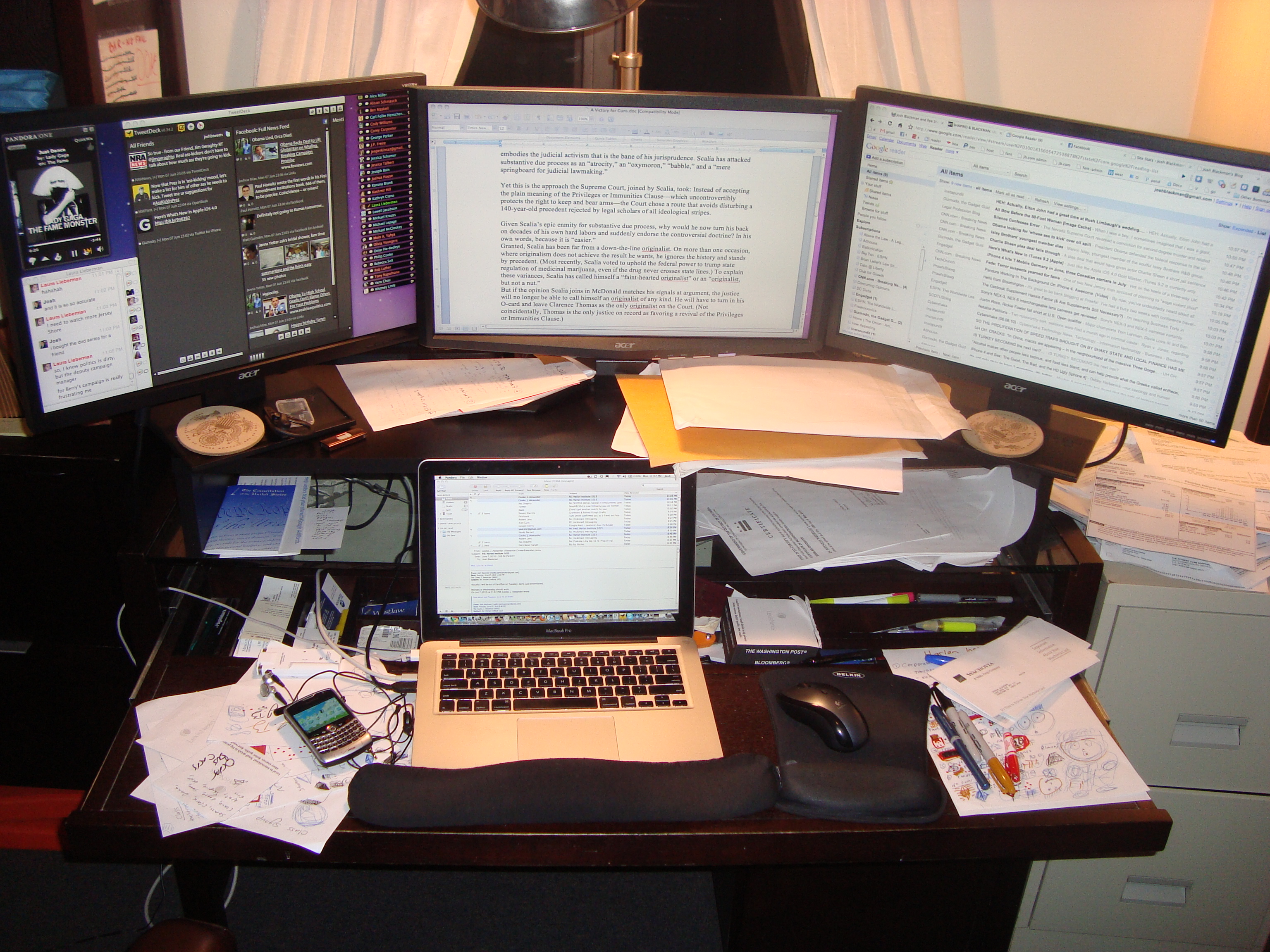