What is an out? Metaphysical Umpiring.

I was talking with a friend today about the almost-perfect game last night. I asked him if he thought MLB should overturn the call. He said no. I asked why. He relayed an interesting anecdote that puts a metaphysical spin on baseball.

Once he was serving as a first base umpire in a little league game. There was a close play at first, and he called the runner out. After the inning, a fan told the him that he blew the call, and the runner touched first base before the first baseman made the catch. He said that very well may be true, but the runner was out because he called him out.

In other words, an out is whatever the umpire says it is. Even if the runner made it across first base before the catch, if the umpire says he’s out, he’s out. Subsequent protestations to the umpire, and in perhaps the commissioner of major league baseball, don’t change the fact that the runner was out.

So, I asked, what is an out? Whatever an umpire says it is? nIf a tree falls in a forest, and there is no one there to hear it it, does it make a sound? If the first baseman catches the ball before the runner touches first, but the umpire does not see it that way, is the runner out?

He also made an interesting comment about making calls at first. When serving as an umpire at first base, he said it is impossible to keep your eyes on the base and on the catch. You can’t see two things at once. So what he does, is keep his eyes on the base, and listens for the ball hitting the first baseman’s glove. If he hears the ball hit the glove before the runner touches first, he’s out. If you keep your eye on the glove, you won’t hear the first baseman hitting the bag.

If you look at this picture from yesterday’s game, it looks as if Joyce’s head and eyes are focused on the catch, not on the bag. Perhaps this contributed to the blown call? Who knows. 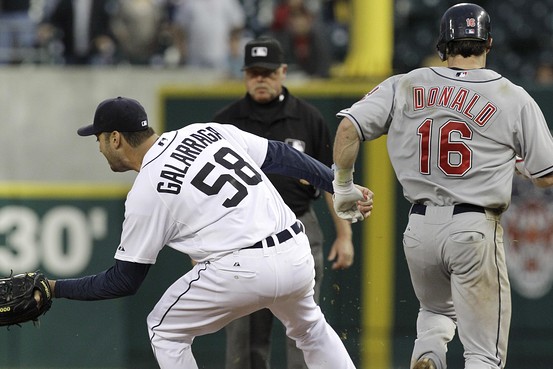