The first case we will look at is Citizens United v. Federal Election Commission, commonly known as the Hillary Movie case. 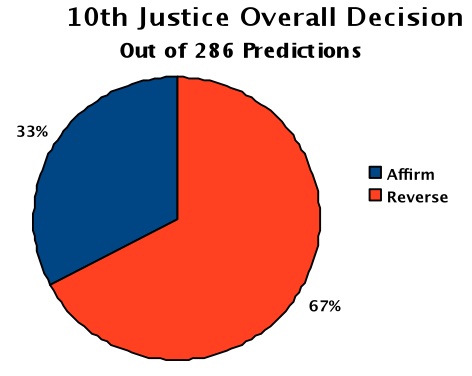 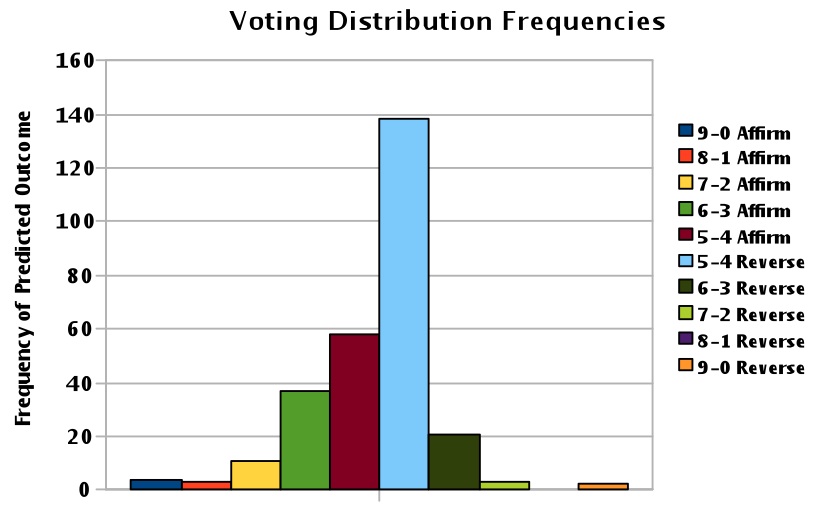 On this bar graph, the 9-0 and 8-1 Affirm splits each garnered less than 5 votes, along with 7-2, 8-1, and 9-0 Reverse. This graph reinforces the predicted outcome from the first chart.  Most members are predicting a 5-4 Reverse, while those predicting an Affirm were more moderately split,  slightly favored a 5-4 splitover a 6-3 split. Overall, the 10th Justice predicts a 5-4 decision reversing the lower courts holding.

But how will each Justice vote? Predictions, after the jump. 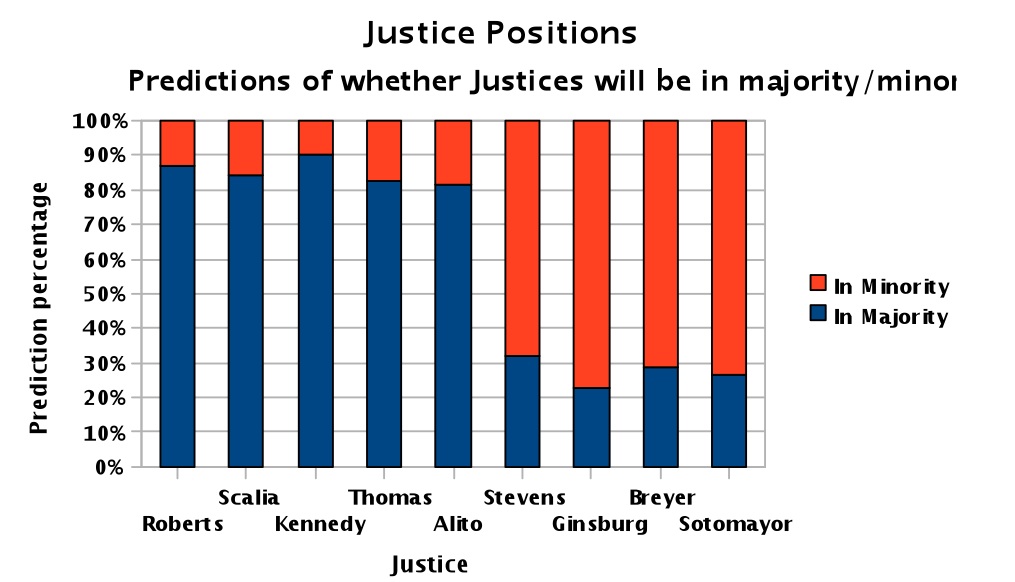 Our final graph shows how often each Justice would be in the majority or minority, displayed in percentages. Because members are not required to guess which way the individual Justices vote, the prediction pool is slightly smaller than in the other graphs, but only by 10-15 predictions. Generally, the graph shows that most users feel that the majority will consist of Roberts, Scalia, Kennedy, Thomas, and Alito, and the minority will be Stevens, Ginsburg, Breyer, and Sotomayor. This outcome conforms to the predicted 5-4 split (which would be a reversal if the other predictions are correct).

However, this chart presents an interesting issue in that the Justices in the predicted majority are predicted over 80%, while a reversal was only predicted by 67% of users (for the predicted minority, their rates are much closer to the 33% affirm votes). Because these results are not sorted by affirm/reversal decisions, it is harder to sort out what the exact composition will be of the majority in the context of the decision. But this information is interesting in that it forms a framework by which to detect characteristics of each Justice. For example, Kennedy’s 90% predicted membership in the majority could indicate that Kennedy is a persuasive bellwether for this case or holds out to decide split votes. Although none are close in this case, a close percentage for majority/minority could indicate uncertainty about a Justice or the outcome of case.

In closing, it seems that the 10th Justice finds that there will be a 5-4 decision reversing the lower court’s holding with Roberts, Scalia, Kennedy, Thomas, and Alito in the majority. Not much of a surprise based on conventional wisdom, but the numbers seem to support this outcome.