Tyler Cowan NYT: How an Insurance Mandate Could Leave Many Worse Off

From Todays NYT, Tyler Cowan writes a fantastic piece about how insurance mandates may make society worse off. (H/T Volokh). I echo Professor Adler, and encourage everyone to read this article in its entirety. Cowan is one of the top economists around, and he hits the nail right on the head.

Americans seem to like the idea of broadening health insurance coverage, but they may not want to be forced to buy it. With health care costs high and rising, such government mandates would make many people worse off. . . .

Defenders of a broad health insurance mandate argue that it will lower average costs in the health care market. The claim is that many of the uninsured are young, healthy or both, and that bringing them into the insurance pool might lower average premiums by spreading risk across low-cost groups. Yet Massachusetts has had a health insurance mandate for several years and this cost-saving mechanism does not appear to be kicking in.

At this point, it seems more plausible that the cost of health insurance will keep rising, just as the costs of health care services have continued to climb. The upshot is that the burdens of mandatory purchase, the subsidy costs and the associated implicit marginal tax rates will all increase, eventually to the point of unsustainability. . . .

We’re often told that America should copy the health care institutions of Western Europe. Yet we’re failing to copy the single most important lesson from those systems — namely, to put cost control first. Instead, we’re putting our foot on the gas pedal and ratcheting up the fiscal pressures on the system, in the hope that someday, somehow, it will all work out.

As it stands, we’re on the verge of enacting a policy that is due to explode, penalizing many of the very people that it was ostensibly designed to help.

And there are serious potential John Galt problems with Obamacare:

To ease the burdens of the insurance mandate, the reform proposals call for varying levels of subsidy. In some versions, such as the current Senate bill, subsidies are handed out to families with incomes as high as $88,000 a year. How long will it be before just about everyone wants further assistance, and this new form of entitlement spending spins out of control? It’s possible to lower insurance subsidies, but then the insurance mandate would impose a bigger burden on the people we are trying to help.

The fiscal reality is that not all income groups can receive equal subsidies; as a family earns more, its subsidy would probably decrease, eventually falling to zero. But then we are taking money away from the poor as they climb into higher income categories. This is a disincentive to earn more, and the strength of the disincentive increases with our initial generosity. For many people, the health insurance aid would phase out when food stamps, housing vouchers and the earned income tax credit also end and the personal income tax kicks in.

This structure of incentives would likely discourage many parents from earning a better life for their children. Congress could tweak the subsidies so they don’t phase out so quickly, but then we’re back to very high fiscal costs and subsidies for many families in the higher income classes.

And I love the graphic the NYT inserted: 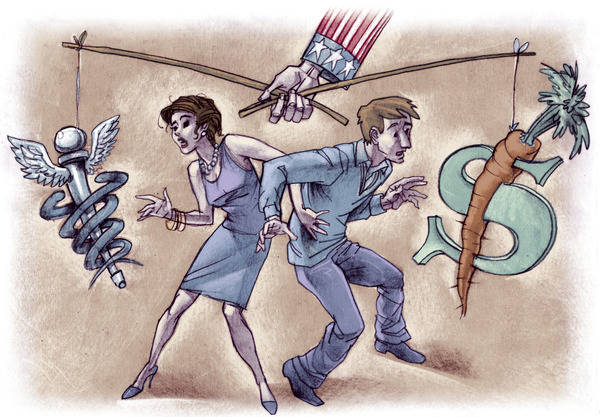