My comments in blue.

Rather than allowing opening statements, Karlan is asking questions and creating a discussion. AND, questions only from students, not from Professors. Sadly, Professor Ackerman is not in the room for this golden opportunity. However, the panelists still manage to give lengthy answers to the questions that curiously mirror an opening statement.

“I miss traditional Marxism.” I feel like breaking out and signing “Those were the Days” from All in the Family or maybe Back in the USSR. He does not miss hectoring domineering, but he misses the fitting of points into overall structure, global capitalism. Miss importance of political inequality translates into political oligarchy, and political oligarchy dominates political decisions, e.g., organization of the Senate. Gives oligarchy extra advantages. Affects structures of the careers.

We still have a discriminatory immigration policy. US only country that assumes that demands for immigrants will be same form every country. Latin American and Asian countries face waiting periods of over a decade, while European countries are favored. We should introduce constitutional norms and values.

Karlan remarked she is sitting in the room where she studied Constitutional Law from Robert Bork, and segues into Judicial Nomination Process. LOL.

“I’ll be very brief, I hope.” Such a typical progressive academic introduction, lol.

Confirmations are best opportunity to articulate a progressive view of the Constitution.

“With Sotomayor you would have thought it was John Roberts’s hearing.” She was muzzled by the White House, she did not hear about her background, how her experience srelated to the type of Judge she would be, she did not mention the Constitution. Senate Democrats are to blame. They had all opportunities. The White House should have allowed Sotomayor to articulate the liberal vision ad progressive values of the Constitution.

Over last 8 years we saw constitution shredded to bits. Lawyers at OLC wrote memos’s that authorize torture. Obama does not want to touch it. Cheney and Bush, government in exile, doing everything they can to campaign against investigation. People died from torture. We need to press Obama and Holder to expand investigation into not just CIA operatives that carried torture outside Jurisdiction, but “hold lawyers accountable.” Amazing that a group that doesn’t mention the text of the Constitution at any point in this 3 day conference is so afraid of it being “shredded.”

A big public fight in the confirmation process could be a teaching moment. Fights should be in dark terms. Define liberal vs. conservative.

How to divide and conquer the consevatives?

How to divide conservatives? Get people to see that they have a common interest against conservatives. Health care debate, promise of hope of universality by appeal to people who feel that something will be taken and redistributed to less worthy groups. E.g., “blacks, latinos, and immigrants.”

Bottom third of country gets no political representation at all because other side so successful in demonizing it as unworthy.

Academics should write simplified versions of scholarly literature for magazines and mass consumption. Academics see tension, due to the purity and complexity of the work.

If Academics just talk amongst themselves, they are going to lose the battle. Debo is exactly right. I made this exact point my first day. This conference has been incestuous. Academics talking to other academics achieve little. I realize the irony of criticizing the ivory tower while sitting in a law school that resembles a medieval castle, but this point is dead on.

To organize people around media issues, focus on broader issues. Everyone should have access to Internet, media too consolidated, if you don’t like what you see on TV, there is something wrong.

Privileges or immunities deals with citizens. But scholars make up citizens doesn’t mean what it actually means. This is a jab at Ackerman, among others.

“Appalling” that Yale Law School has not hired a single Latina Professor. Oh snap! I’m sitting right next to Dean Post. He didn’t even flinch.

Karlan on Liberalism and the Supreme Court

Supreme Court is 4 liberals, one conservative, and the four horsemen of the apocalypse. LOL

Sotomayor will be an excellent Swing Justice. Great, another O’Connor.

Debo Adegbile is the Thurgood Marshall of his generation. Lofty praise. He won NAMUDNO

No one on this panel is as far to the left as John Roberts or Clarence Thomas is to the right.

If we had won the 2000 election, we did win the 2000 election. If we would have gotten a different President, the cases would have come out differently. Brennan said 5 votes a theory any day. Karlan is much more politically savvy than the other pointy head academics. I hope Obama stays far away.

Federal courts are currently obstructive to advance civil rights. We do not have the Warren Court. Best bet is to keep them at bey. Senators Whitehouse and Franken did best job by exploring radicalism of conservative court. “Roberts and Alito are trained as ideological – in revolutionary movement.” They are “sleeper cells that are activated” as though they are defenders of conservative values. They are radicals who want to bring about radical transformation of the courts. The Senate shoudl “demonize” these Judges. Focus on Dormant commerce clause and preemption cases.

Primary role of court to defend weak against the strong. Empathy to Republicans is awful thing, but torture is a wonderful thing, and anyone who tortured should get immunity.

Karlan- It is bad to be empathetic and in favor of torture, because then you will hurt yourself. Karlan FTW! She is snappy.

Gordon- Liberal no longer stands for New Deal policies. liberal has come to be a snooty intellectual elitist who looks down on my cultural values.

Saenz– Being a “Wise Latina” may actually make you a better Justice. I knew Sotomayor believes this and many on her side do as well. I don’t agree, but I think it is disingenuous of her to back away from those statements.

The left does not have a reliable test to determine progressiveness of judicial candidate.

The text of the  constitution is at a level of generality that permits us to do a lot. Change how it is interpreted, and how everyone views the values it embodies. But why bother talking about the text if it is so general?

Response to originalism: vast majority of us, families came to this country more recently than the people who wrote it.

Discussion of voting with feet. Immigrants vote with their feet. Immigrants have a sense of what is in the Constitution, and this governs the values of how we should interpret it. This is just as legitimate as what founding fathers believe. 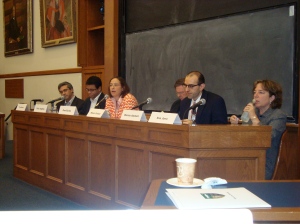