Pam Karlin tells it like it is. Call us Liberals, not Progressives. Candor at this conference is refreshing.

(this is a repost of Liveblog of Panel 8)

I’m reminded of the Ting Ting Song, That’s not my name!

Karlan commented that the Supreme Court is 4 liberals, one conservative, and the four horsemen of the apocalypse. LOL. Who’s who?

Karlan commented that Sotomayor will be an excellent Swing Justice. Great, another O’Connor.

No one on this panel is as far to the left as John Roberts or Clarence Thomas is to the right. I highly, highly, highly doubt this. We had a panelist today say he “missed traditional marxism.”

People always want to keep their options open. The aim of life is not to die with open options.

If we had won the 2000 election, we did win the 2000 election. If we would have gotten a different President, the cases would have come out differently. Brennan said 5 votes a theory any day. Karlan is much more politically savvy than the other pointy head academics. I hope Obama stays far away.

Gordon replies- Liberal no longer stands for New Deal policies. liberal has come to be a snooty intellectual elitist who looks down on my cultural values. Hard to rescue that term.

I think Karlin’s views are way to the Left, but the candor and honesty of her views is refreshing. She doesn’t seek to hide behind labels and veneers. I respect her for that. I also think she won’t make it through SCOTUS confirmation. Which is also good. 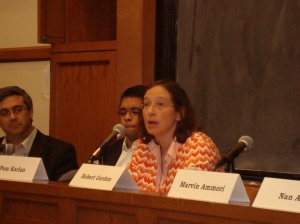