Those Robots Took Our Job! 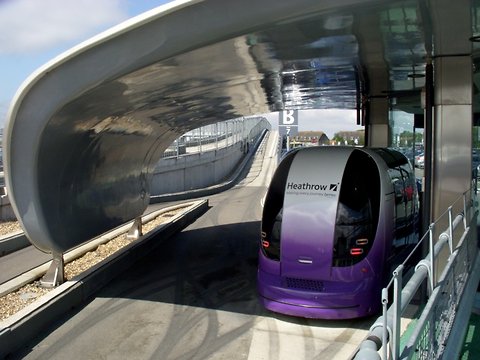 They terk er jerbs!!! These really cool automated pod cars at Heathrow airport has eliminated the need for diesel busses, and their drivers. From the Times:

Starting from the second level in Terminal 5, I recently took the pods for a chaperoned test drive — or more accurately, they took me. The electric carshave no visible accelerator or steering wheel; rather, they are completely automated and travel along a dedicated guideway. My only input consisted of a button push, which indicated my destination.

Quiet and comfortable were my first impressions of the five-minute ride between the terminal and parking lot. Onboard, the only sound over the familiar whirr of the electric motor was the recorded voice announcement from the iPad-like control panel inside the car, assuring me that I was “almost there.”

Several pod cars making the trip in the opposite direction whizzed past. Top speed is about 25 miles per hour. Alicia Griffiths, the BAA spokeswoman who rode along with me, assured me that the system had not experienced any accidents.

From an operational perspective, BAA is declaring the system a success, according to Ms. Griffiths. Two diesel-powered buses that used to make 216 trips daily along this route were removed from service in June, and now 22 pod cars shuttle nearly 800 passengers every weekday over 2.4 miles of track. Each car can carry four passengers and luggage. The cars have had very little down time for maintenance or repair; reliability has been above 95 percent, Ms. Griffiths said.

Energy efficiency is improved not only by replacing diesel vehicles with electric ones, but also because the pods move only on demand. Rather than making constant, endless loops between the terminal and parking lots, irrespective of passenger load, the pods operate only when travelers request them.